How North Glenora got to Yimby

The official sod turning on Westmount Presbyterian Church’s new multi-family housing development happened June 17, 2016.  Many of their neighbours, myself included, were there to participate.  To use a term coined by Mayor Iveson, North Glenora has said “YIMBY” to a mixed income housing project that I am convinced has a place in each and every community in Edmonton. 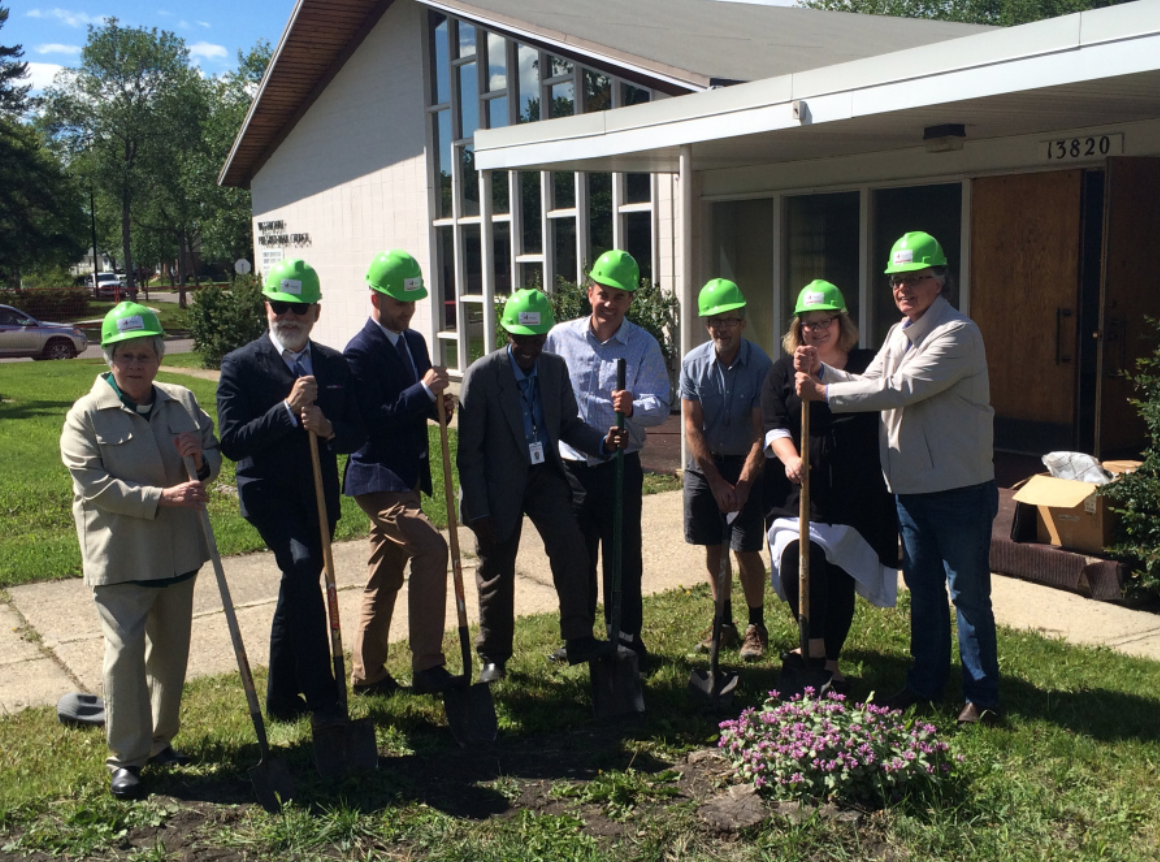 When the Westmount Presbyterian Church (WPC) – an anchor property in our neighbourhood directly across the street from Coronation School – announced its plans to develop the land into affordable housing the community reacted predictably.

The announcement was coincident with the clash between the Holy Trinity Anglican Church, affordable housing developers and the community of Terwillegar.  More than once the words “…we don’t want this to be another Terwillegar…” were voiced in our meetings with WPC and the developer Intermet (now Right at Home Housing Society).

North Glenora is a very tight-knit, mature neighbourhood where people watch each others children, volunteer for the Community League (NGCL) and share news over the fence.  In other words, we’re no different than any of Edmonton’s wonderful communities.

In the early vacuum of information, fear of the unknown came to the surface.  Concerns over increased density, impact on property values and increases in crime were imagined, shared and repeated.  “There goes the neighbourhood…”

It took dozens of meetings and hundreds of hours of focused effort on both sides to get to “YIMBY”.  We wanted to tell our story in case it would be useful for other communities and developers.  What follows is my attempt to summarize how we got to YIMBY and what we learned along the way.

In our first meeting with the WPC and Intermet we established that our objective was to have a best-in-class, inclusive community engagement process in order to deliver the best possible outcome for all parties.  We agreed that it would take time, but that WPC would commit to listening to the community and incorporating their feedback into the design[i].

I believe that everything good that followed hinged on this first understanding…and that enormous credit is due to WPC and Intermet for having the courage to engage in this process with the community.  Having this shared understanding in place up front gave us a touchstone when discussions got heated or when shortcuts began to look appealing.

It is far better to ask the developer up front if they intend to involve community feedback in a sincere way, than to merrily engage in dialogue until they satisfy the requirements of their development application and just do what they always intended.  You would be wise to agree on a mutually understood definition for community engagement as well.

Very soon after WPC announced their plan, the NGCL Executive met and agreed that the Planning Committee would represent the community in communications with the developer.  We met as a committee to discuss what we wanted to achieve, and set our first meeting with the WPC as soon as possible.

In that first meeting we came prepared to listen with an exhaustive list of preliminary questions that we felt would allow us to report the initial development plan knowledgeably to the community.  Questions included:

It’s amazing what you can learn when you ask questions and are prepared to listen.  We also committed to regular, open communication in order to establish and maintain mutual understanding among the parties.  Out of this came a rough timeline for the engagement, including different hurdles and milestones for soliciting direct community feedback.

It seems that the Achilles heel of most re-development plans in the city is that too many decisions are made too early without involving the community…committing the developer to a plan before engagement has taken place and derailing authentic dialogue before it can happen.

A great question to ask in your first meeting is “Are you willing to listen to community input and feedback on the plan, and incorporate it into your design, within reason?”  If the developer is unable to say “yes” with sincerity, then you don’t really have an authentic community engagement ahead of you.  If this is the case, you might even decide to withdraw as a committee from the engagement.  You don’t want to find yourself unwittingly coopted into an inauthentic engagement process on behalf of the neighbourhood.

As a committee we would get together to prepare our approach to each meeting.  We selected a spokesperson who would be responsible for driving the agenda.  With several parties at the table and so many competing agendas this is important in order to ensure you achieve the outcome everyone needs from each meeting.

We took careful notes of everything that was said and agreed to in the meetings, and followed up by sending detailed minutes to all participants so that they could review them, make any comments or changes, and then approve.  Once approved, these minutes were published to the North Glenora Website[ii] for public viewing and posterity.   We updated the NGCL Executive and solicited feedback when necessary to ensure that we were on the right track, and provided regular progress updates to our community email list, and in our monthly paper newsletter.   Each of these updates ended with “If you have any questions or comments please contact us at ngcl.plan@gmail.com”.

In this way we behaved like a professional Board of Directors…and with good reason.  In an environment where emotions were high and opinions strongly held, we wanted to ensure that the committee could not be seen as having a secret agenda in the discussions with the developer.  At all times we tried to represent what we believed to be in the best interest of the community, and made public everything we learned or did as it happened for review and comment by the community.

Another core principle that served the Committee was that we would only speak on behalf of what we believed to be the best interest of the community…that our own individual concerns were valid only as single voices within the chorus.  In order to speak confidently on behalf of the community, we adopted the “North Glenora Community Development Plan”, established in 1998, as a sort of constitution for the proceedings and asked Intermet to do the same.   At regular intervals we solicited direct feedback on specific issues through on-line and paper surveys delivered door-to-door to inform the developer.   Finally we were sure to schedule periodic town hall meetings where individuals could hear for themselves how the plan was progressing.  Armed with these 3 tools we felt confident we were serving the community’s interest to a reasonable standard.

One of the strengths of our committee was that it contained a diversity of voices from the community – neutral, supportive and opposed.  We also benefited from a strong network of non-committee community elders that we could bounce ideas off informally to test our assumptions about the best path.

We reminded ourselves often that every resident should be encouraged to participate in the process at every stage…that all positions were valid no matter how extreme.  Anyone that wanted to could join the committee and be involved.  We were dealing with a planned development that would affect homes that in some cases had been in a family for 2 generations.  Everyone had a right to be heard[iii].

Many of us might wish to comfortably go about our day without having to have difficult conversations about affordable housing in our neighbourhood…let alone be tasked with representing our community’s diverse and sometimes incendiary opinions on the matter.  As committee members we had to do just that.

To address the fear of affordable housing we decided to take it head on…unblinking and in as emotionless a way as possible.  We realised that these concerns were valid and that the community deserved the right to ask them…and to hear the developer’s answers.

The committee found a series of questions on-line from a similar development, and polled the NGCL Board and the community in order to get an exhaustive list of questions and concerns about the impact of the potential development. We then boiled these down to 13 big questions.  Two of the more controversial ones were:

As you can imagine, some understandable outrage was felt and expressed by WPC.  The implication that their inspiring vision of providing affordable housing for new Canadians might result in increased crime and lowered property values was taken as an insult…yet I believe we had to put each-other through this uncomfortable exercise so as not to let the concerns fester.

WPC and their partners accepted the list and took due time to answer each one in full in writing…a document that was then presented to the Committee for review and understanding before we shared it with the community.

As members of the committee we took the role of devil’s advocate and felt we had to be satisfied that the WPC had answered the concerns in as clear a way as possible to allow neighbours to make an informed decision on the proposal.

Our assertion from the beginning was that by involving us in the process they stood to gain not only our support as a community, but also a better final design to serve their vision – one that would be welcomed and embraced by the neighbourhood.

In retrospect there were 2 leaps of faith required of the parties.  We asked WPC and their partners to take a leap up-front to involve the community in their plans…risking delays, confrontation and hundreds of man-hours.  Once the engagement was complete and the development plan submitted North Glenora had to take a leap…to trust that the developer would deliver on their promises.

Remember that North Glenora’s Planning Committee is made up of volunteers…volunteers like you with busy lives, schedules to keep and kids to get to soccer.  Representatives from the WPC had a vision they wanted to bring to fruition, and in a sense we  stood in the way of it.  Despite the potential for conflict, I’m very proud of what we were able to accomplish together.

Our Committee felt that it’s job was to ensure that a robust engagement process was conducted, that the community would have a chance to be heard and that the developer would be encouraged to incorporate their feedback into the design.  Once that was complete it would be out of our hands…the responsibility would rest with individual neighbours to attend the hearing at City Hall and exercise their right to speak for or against the development in an informed way.

Rendering of proposed Church and Townhouse

Fruits of our Labour

On September 28, 2015 the Westmount Presbyterian Church invited the community to one last Open House to hear the final development plans for the site.  Like all previous meetings this one was very well attended, and was conducted in an atmosphere of interest and general support.  Peter Amerongen from Habitat Studio described all of the different ways that resident input had been incorporated into the materials and design of the building.  He shared that it will be Canada’s first multi-family net-zero emissions housing project.   Cameron Macdonald of Right at Home Society shared that they would pursue a mixed-income model and described how the new drive aisle had been redesigned in order to address safety concerns.  They both went on to answer every question raised by the community…well prepared and confident that they understood our perspective.

Perhaps most importantly, they ended by saying that if there was ever any unanticipated issue that needed to be addressed, that they would commit to taking it head on in consultation with their neighbours.